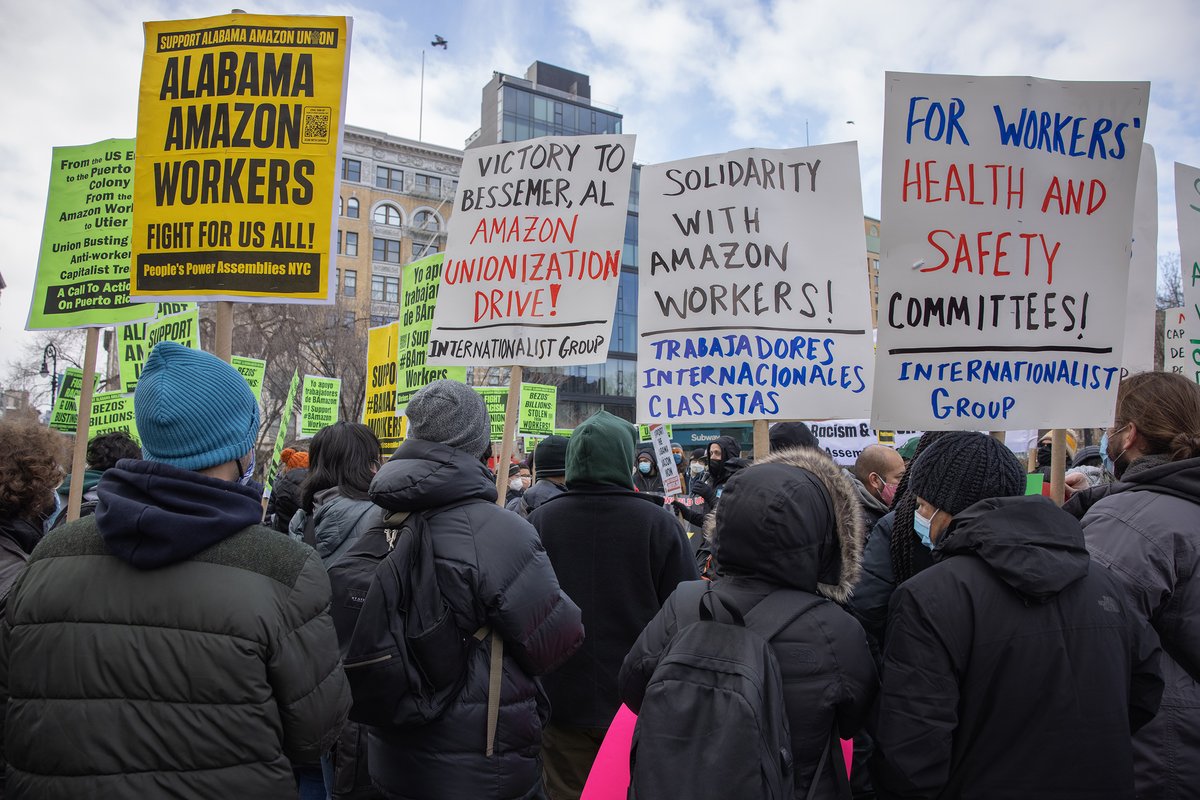 
Update May 31, 2022: The vote count at the AGM on the shareholder proposal to nominate an hourly associate to the board rose from 18% in 2021 to 27% in 2022; several other proposals around labor practices did well, though none secured a majority of votes.

Today, Amazon shareholders vote on a proposal to add a worker (an “hourly associate”) to the company’s board of directors. In simplest terms, this would put a worker directly at the table where the Directors discuss and make decisions about how the business is run.

Oxfam has invited Jennifer Bates, an Amazon worker from the warehouse in Bessemer, Alabama, to present Oxfam’s resolution, speaking directly to Amazon’s CEO, Board, senior leadership, and corporate investors. We urge you to listen to her voice here.

If a worker were to join Amazon’s board, the Directors would have the opportunity (and obligation) to hear about the impact of their decisions on the roughly one million people who clock into Amazon properties every day: warehouses, stores, trucking facilities, office buildings.

Consider what it would mean for a worker to tell the Directors, in real time, about what actually happens on the floor: injuries, wages, speed, robots, supervisors, bathroom breaks, turnover rates—and the sheer need for dignity and respect for every person who works for the company.

But there’s more: it’s also good for the business itself. The fact that it’s a win-win-win all around makes it not just the right thing to do, but the economically sound decision as well—yet current Amazon leadership is opposed. We’d like to know the reasons why they oppose this initiative. We know our reasons why it’s an excellent idea…

1 Amazon needs a worker on the board because current labor practices are running through workers.

The average Amazon warehouse worker only lasts eight months on the job.

The rate is so high in some areas that the company is exhausting the local labor supply. The reasons why workers leave (even if Amazon pays more than the local prevailing wage) are complex, but clear: the company has been publicly excoriated for mistreating workers, including reports of dehumanizing working conditions, anti-union activities, and paying such low wages that employees must rely upon SNAP benefits (food stamps).

2 Amazon needs a worker on the board because the pace of work is injuring workers at extraordinary rates.

Employees have described workplace conditions as “hellish,” “grueling…[and] unsafe”; the warehouse injury rate is 80% higher at Amazon than at rival companies.

Notably, warehouse workers in the US, UK, and Europe tell stories of long, grueling hours, hard physical labor, fears about taking time off, and preventable workplace injuries that portray the stark differences between conditions in the warehouse and the offices of upper management.

3 Amazon needs a worker on the board because the directors need to understand what it means when a coworker dies on the job.

The COVID-19 pandemic took a terrible toll on essential workers who were compelled to show up in person to work. Workers in warehouses, factories, processing plants, and retail stores suffered high rates of infection and fatalities.

If the board could have heard firsthand about what it is really like to be working in crowded conditions at a time when a highly transmissible airborne virus is circulating, protections might been better from the start; and if they understood what it is like to have a colleague fall ill and never return, they might have been persuaded to do more to honor and protect each life.

During the pandemic, warehouse workers raised concerns that Amazon failed to protect them from getting sick, and called for facilities with confirmed cases to be shut down. Employees expressed alarm at workplace conditions, including “dirty air filters that aren’t replaced, a visibly ill colleague who vomited in the bathroom–even after passing the mandatory temperature checks…and workers standing close together….It’s like I’m risking my life for a dollar.”

4 Amazon needs a worker on the board because workers represent voices that are otherwise missing.

Amazon’s board remains mostly male and white, even though the majority of hourly workers are of color and women. Not one person on Amazon’s board has any idea what it means to try to keep a household running right now on $15 an hour—or $20 or $30 an hour.

5 Finally, Amazon needs a worker on the board because it will make the company more successful.

Workers are the ones who know the ins and outs: from the tape to the robot arm to the distance to the bathroom, they experience it every day.

There is evidence that companies with workers on the board perform better–including higher profits, capital market valuation, employee development, and investments in capital and R&D–than companies without a model of shared governance.

The proposal to place a worker on the board of directors represents a win for workers and for the company and its shareholders, but Amazon leadership opposes it. We’d like to know why.

Why shareholder resolutions? (drop down)

Introducing shareholder resolutions is an important element of Oxfam’s private sector strategy. Oxfam purchases and holds enough stock in certain companies that it has the right to file resolutions ahead of Annual General Meetings (AGMs) of publicly-held companies (and then cast votes on the resolutions).

For nearly 20 years, Oxfam has been using this strategy to educate and mobilize shareholders about deleterious corporate practices, and to amplify the benefits of more responsible behavior. In 2010, Oxfam urged RJ Reynolds to support a stronger human rights policy, especially for workers in the tobacco fields; we worked with shareholders and Fair Trade coffee advocates to pressure Kraft at its 2003 AGM; worked with partner groups from Ghana, Peru, and Nevada around Newmont Mining Company’s 2005 AGM; and raised Ethiopia trademark rights at Starbucks’ 2007 AGM.

More recently, as part of the campaign to advocate for better conditions and compensation in poultry processing plants in the US, Oxfam raised worker voices at AGMs of the top three publicly-held poultry companies (Tyson Foods, Pilgrim’s Pride, Sanderson Farms).

And just this year, Oxfam rallied nearly 30% of Moderna and Pfizer investors to support the feasibility of transferring COVID-19 vaccine technology to spur manufacturing in low- and middle-income countries.

If you’d like full details about the resolution, and the case for a worker, please read the full proxy memo on the SEC site.