Don’t miss your chance to vote for good 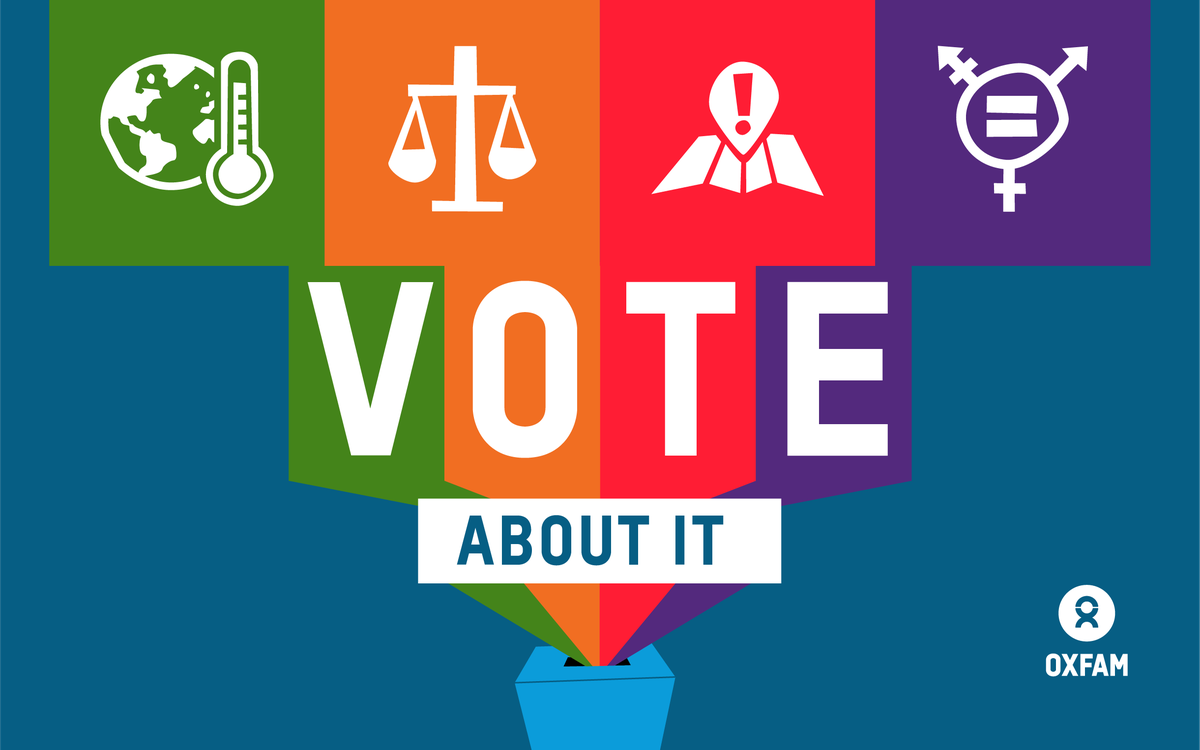 07 Nov Don’t miss your chance to vote for good


First off, who’s on the ballot on November 8, 2022? Voters will decide all of the 435 House of Representative seats, a third of the seats in the US Senate, and hundreds of state and local elections in the midterm elections. Second, what about issues? People will vote on reproductive rights, climate change mitigation and resilience, our democracy, economic equity, food security, and more.

Since turnout is lower for midterms, it’s been a priority for Oxfam to get people to register and vote this year! As we come close to the end of election season, we’d like to highlight some of the amazing work that Oxfam US grassroots partners have done on the ground to get underrepresented voices out to vote.

Interfaith Power & Light has led voter mobilization efforts in three crucial states. Its efforts to educate and inspire people to vote on the values of climate justice through their multi-faith coalition reached 550,000 targeted voters. One of their main focuses is how suppression tactics have made it difficult for people of color, low-income people, and students to get their votes counted.

The organization has disseminated educated voter information in Spanish and English through various forms of media, faith leader sermons, and a faithful voter reflection guide. As the activists continue to mobilize people of faith with an inclusive and equitable approach, as well as strengthen their collective work against structural racism and economic marginalization (especially in this election season), we would like to share our appreciation for all their work.

Leaders Igniting Transformation (LIT) engages youth of color to civically engage in their communities, and has led bold electoral organizing campaigns in Wisconsin, including in the 2022 midterm election.

Through door-to-door canvassing, voter education materials, and digital voter outreach, the organization encourages young voters to make well-informed decisions when casting their ballots. LIT also advocates for the expansion of polling locations and hours, multilingual poll workers, and fair redistricting for communities of color. The goal is to build political power and inspire young voters to engage in direct action, public policy advocacy, and leadership development.

Further, LIT focuses on empowering youth of color to advocate for criminal, environmental, and immigration justice, and organize against racial, gender, and LGBTQ+ inequities. It’s a great honor for Oxfam US to partner with these value-based trailblazers; we hope to continue building partnerships with inspirational and inclusive grassroots organizations to increase political power in underrepresented communities.

Through the collection and dissemination of community narratives and shared experiences, the Campaign for a Family Friendly Economy promotes an inclusive economy for all families. The organization emphasizes the importance of paid family and medical leave, affordable child care, livable wages, and more.

As Oxfam US continues to support grassroots efforts like this, we reflect on the inequalities and injustices facing working families not only here in the United States, but around the world. We also must not forget women’s unpaid and undervalued roles as we continue fighting for paid parental and sick leave policies to create more equitable households. We thank the Campaign for a Family Friendly Economy for trusting us and partnering with us as we promote the creation of more equitable systems.

Oxfam is proud to support our colleagues at One Fair Wage in their tireless efforts to abolish the sub-minimum tipped wage. While federal law has kept the tipped wage at $2.13 an hour for more than 30 years (!), many states and localities have abolished or raised the tipped wage. On November 8, new initiatives will be on ballots in Washington, DC and Portland, ME.

The One Fair Wage coalition includes all workers for whom tips are considered wage replacement–including restaurant workers, nail salon technicians, car wash workers, tech platform delivery workers and drivers, hairdressers, massage therapists, and many more. Abolishing or raising tipped wages would have a hugely positive impact on these workers, who are disproportionately women, people of color, and immigrants, and would help minimize the gender and race pay gaps.

As election day is upon us, we reflect on the importance of casting well-informed and educated votes. Our political debates and decisions in the US have global ramifications, so it’s our responsibility to ensure we make choices that advance justice and equality for all. As families around the world face accelerating threats from climate change, conflict, racial and gender discrimination, and oppressive governments attacking reproductive rights, this is a moment that we must all rise to meet—together.

Oxfam’s commitment to a more equal future means delivering both short-term aid and long-term change. Speaking out against economic inequality in the US—and the forces that perpetuate it—is core to our strategy to create a more equal future for all. We hope you’ll add your voice to ours this election cycle and beyond.