Disasters expose and expand the fault lines of inequality 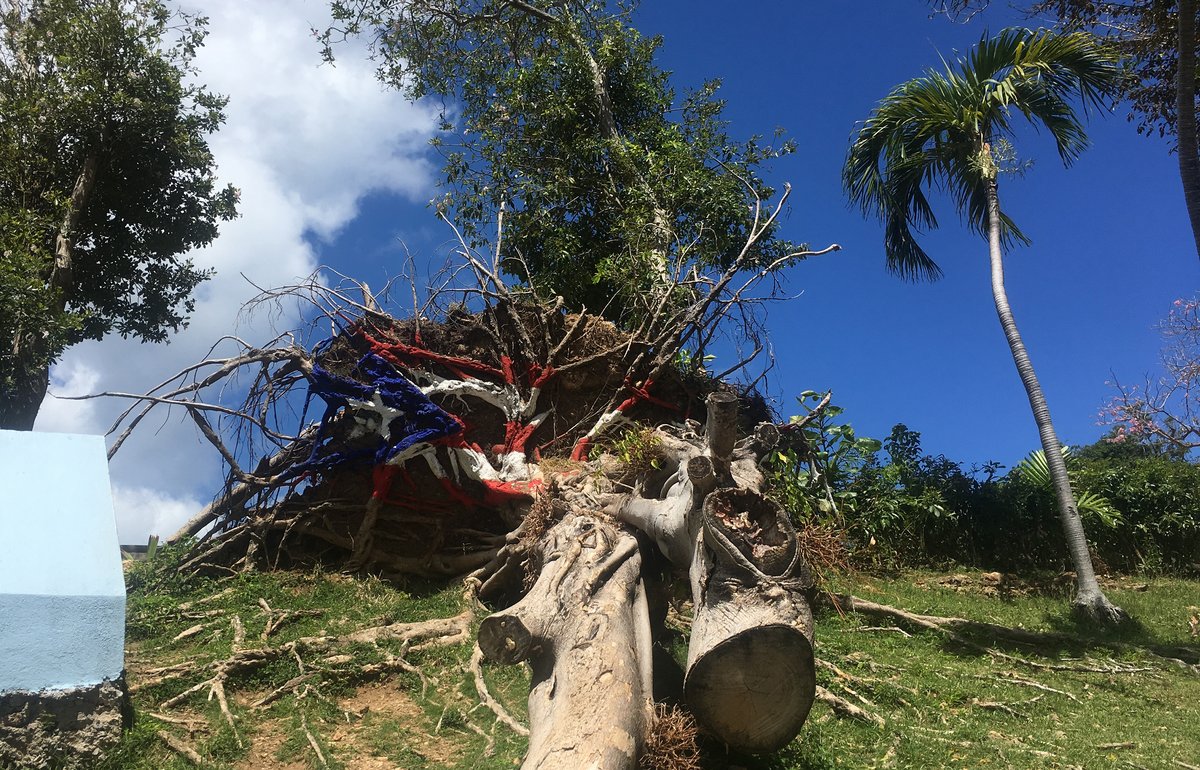 27 Sep Disasters expose and expand the fault lines of inequality


Every time disaster hits, it exposes and expands the fault lines of inequality. First, disaster has the hardest impact on vulnerable communities (and the lightest on the most privileged); and second, it usually exacerbates the problems underlying systems of inequity.

In the last five years, Puerto Rico experienced these phenomena, in the immediate and long-term aftermath of Hurricane Maria. While communities pulled together to help each other—and build back stronger—the island still struggled under the weight of intersecting challenges: crumbling infrastructure; outside investors snapping up properties, land, and resources; new tax laws that encouraged outsiders to move in without paying their fair share; complicated relief protocols that denied or delayed funds; a dramatic geography with pockets of poverty; gendered division of labor and responsibilities that put more pressure on women in the household and the workforce; and more.

When Hurricane Fiona blasted Puerto Rico on September 18, it flooded right into these fault lines, leaving hundreds of thousands of people stranded without power or water, while delivering a much less forceful blow to those in more secure positions.

“It’s amazing how much water goes up to the clouds and comes down all at once. It’s incredible how a storm becomes a hurricane,” says Massol-Deyá. And then, he says, it’s over. “Today is difficult—the sun is shining, it’s a beautiful day on a beautiful island, and the sky is clear. When the storm is over, it’s hard to remember the floods and the wind. But it’s the aftermath that is the real problem. “

Fiona was more about rain than wind; even though it only registered as a Category 1 hurricane when it hit, it dumped enormous amounts of water on the parts of the island that are most vulnerable to damage from heavy rains and flooding: the mountainous interior and the southwestern coast, which is where the storm entered and exited.

Communities in the mountains—which are already facing poor public transport options, a precarious connection to the power grid and water supply, and higher rates of poverty—are also the most vulnerable to landslides. The sudden downpour on land already saturated by summer rains caused mudslides that wiped out roads and bridges, cutting off access to fuel, food, and bottled water.

These are the areas that lost connection to water and power almost immediately when the storm hit. And they are the most likely to have to wait weeks or months for systems to be restored.

After Maria, some communities were without water for several months; the toll on communities and households was enormous and relentless. (For more on how Puerto Rican communities coped without water, refer to Oxfam research on Weight of Water on Women.)

Roughly 30 percent of Puerto Rico is at high to extremely high risk for landslides in intense rainfall conditions; the areas highlighted as susceptible are precisely where Fiona delivered the most rain.

The power grid in Puerto Rico continues to be fragile, leaving it vulnerable to high winds. The rickety power lines in the mountainous areas are hard to access and repair; and according to Massol-Deyá, roughly 80 percent of the lines haven’t been well maintained (e.g., tree limbs have not been trimmed back).

As a result, “power outages are common,” notes Maria del Mar Rivera Martínez, who works at Coordinadora Paz para la Mujer. But when this happens, wealthier households often have backup generators, and ample fuel on hand.

Obviously, power is vital for myriad needs, from communications to medical equipment to food preservation to climate control (it’s been extremely hot in Puerto Rico since Fiona hit); as long as communities rely on the grid, they’re at risk of losing access to these functions.

Access to water is dependent on electricity, which powers pumps. As of this writing, hundreds of thousands are without running water, and millions are without power (it’s been restored to about 40% of customers).

Massol-Deyá points to five deaths directly related to the failure of the grid: three were caused by fire (in one case, an elderly woman was using candles for light); in another, a man was connecting a generator and it exploded; and in another, a man died from fumes emitted by a generator.

For decades, Casa Pueblo has been advocating for and implementing a transition to energy self-sufficiency, in the form of solar panels and batteries; this effort accelerated after Maria. In Adjuntas, the organization has installed solar panels on homes, barber shops, neighborhood grocery stores, laundromats, and more. People gather at these locations to recharge phones, batteries, and more.

“The owner of the store named Don Julio showed up at Casa Pueblo to go on the radio and let people know that the store has cords available for recharging,” he says.

Casa Pueblo also installed solar panels on households where people need to power equipment that sustains their lives (such as dialysis and respiratory machines).

After the storm, it was dark for three days, which prevented solar panels from generating new power; however, the sun did come out, and the systems started up again. Meanwhile, the country’s power grid is still down, and no one knows when it will be restored.

Puerto Rico has a complicated history and present-day reality. Its coastal beauty, vibrant culture, and extraordinary communities co-exist with high levels of poverty. Today, the increase in the frequency and ferocity of extreme weather events has opened the door to new forms of exploitation, and a dramatic increase in inequality.

After Maria, developers swooped in to buy up properties at rock-bottom prices, and in 2019, a law went into effect designed to attract wealthy investors and promote “economic development.”

A promotional website explains that it’s easy and profitable to deny Puerto Rico the compensation it deserves: “Thanks to this code, your income sourced from Puerto Rico can be exempt from both federal and state taxes. At the same time, you’ll retain your U.S. citizenship and won’t forfeit Medicare or Social Security.”

The incentives did serve to attract wealthy influencers, crypto tycoons, and developers (mostly not Puerto Rican); they also managed to drive up housing prices and push people out of their neighborhoods, and to encourage destruction of natural resources, such as the deforestation of mangroves and the filling of wetlands.

Massol-Deyá notes that when developers build on wetlands, they fill in the land, which reduces its capacity to absorb floodwater. The runoff rushes to the lowlands—home to low-income communities that suffer the consequences.

Houses built for the wealthy are made from stronger materials, and they’re often raised to be high enough to avoid flood damage.

And, as Rivera Martínez says, “The gentrification has caused a housing crisis, which means that with every emergency, it becomes worse for people seeking housing.”

All the recent disasters in Puerto Rico (from hurricanes to earthquakes) reveal how much women do to keep households and communities functioning. They are leaders, caretakers, organizers.

Rivera Martínez says women are much more affected when systems fail, as they tend to shoulder the responsibility for providing food and water, washing clothes, and caring for children, the elderly, the disabled.

Most of the GBV (gender-based violence) shelters run by local organizations are open; even if they don’t have power or water, they have residents. “It’s tricky to respond when there’s no power or water, and there’s damage to the structure.”

She says that it’s better this time; after Maria, communications were down, and cell phones were not working. The lines are now open 24/7, though with interruptions.

The most significant difference this time is in access to communications; for example, after Maria, it was nearly impossible to find cell service on the island.

Casa Pueblo invested in a variety of communications platforms: satellite internet, a transmission tower; their solar-powered radio station. worked again. Massol-Deyá notes, “we were so much better prepared this time.”

He also says that communities have invested in resiliency, in the form of solar lamps and bottled water. “After Maria struck, we had to call on diaspora in the US to provide so many things. It took so long and was so inefficient. We’re better positioned now.”

Still, he notes, there is a long way to go. “Our real aspiration is eventually not to need the solar lamps; we want the whole system to be solar, so we can store energy in batteries that we rely on in the dark days during and after a storm…We also want to capture the water that falls, so we don’t have to rely on power for water. We want to collect it, cap it, and use it.”

Hundreds of thousands of people are without power or running water. This situation is dire, and both governmental and nongovernmental organizations are rallying to provide services and supplies.

But it’s a long way back to recovery, especially in the highlands and in poorer communities.

Maria O. Concepción Díaz, PhD, Program Manager for Oxfam in Puerto Rico, says that as of September 26 only 173 out of 860 schools on the island are open.

“The south of the island is really hurting, and many roads are sealed off in the southern and mountain areas. People need warm meals, and water, and homebound patients who rely on life-saving machines really need generators or solar panels.”

Rivera Martínez points to the more systemic problem that plagues Puerto Rico and undermines every emergency response: too many benefits for rich people at the expense of poor people.

It’s always been that way. But there’s no law that says it always will be.

More on women and emergency response